Madonna Della Strada or Santa Maria Della Strada (Italian for Our Lady of the Way) is the patroness of the Society of Jesus, known as the Jesuits.

Its founder, Ignatius of Loyola, was said to have been protected by the intercession of the Blessed Virgin 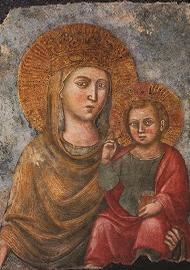 Mary during battle in his service as a soldier. On returning from battle, Ignatius would stop and pay homage to the image of his protector (the Madonna holding the baby Jesus) painted on the exterior wall of Saint Mary of the Way in Rome. It is believed that the image was first painted on the church wall around the 5th Century AD. This Church was later given to Saint Ignatius by Pope Paul III in 1540 and became the first Church of the Jesuits.

As members of Our Lady of the Way Parish we believe that like Ignatius, we too are ‘Blessed’ – we are loved by God, and that Mary is our ‘Protector’ and ‘Guide’ who invites us into a closer relationship with God and with one another. As the mother of Jesus, she was his first teacher who nurtured his understanding of his mission. May she continue to nurture us too, as we come together to celebrate faith, learning and life.